ANTIDOTE WITH ATTEMPTS AT DIAGNOSIS

They did the flow of sodium ions into nerve cells, they did filth in each of the orifices, they did a gem, a pollen shape, they did a transfusion to the vein.

They kept evolving unpredictable results, found a vertigo of snakes and called it the mind, found time and called us its puppets.

They began to sense eternity and accumulate remorse.

They filmed the corrosion each touch would cause, test for hemorrhaging, test for poison, test for the memory of adolescent faith.

They found the secret room where all the genomes drape. They closed a hand’s palm made of images over all nomadic sleep.

They found a landscape in the eye, doing its quiet singing.

They mixed situations to administer with the full complexity of weather, mixed the plumage of unmade bones with their gutterless fray, with a thaw as raw as speech, to help them fracture like timbers or a dove’s cluttered voice.

They admitted an inability.

They lost count of the dying. They fished infants from the creek.

They slept in proximity of the mouths of others to be somewhat like breath.

This poem first appeared in Indiana Review and is forthcoming in Militello's second collection, Body Thesaurus, with Tupelo Press.

Learn more about Militello's work by visiting her website, and/or purchase Flinch of Song, her first collection, from Amazon in the UK (I couldn't find it at any of the independents I tried) or Powell's in the US.
Posted by Carrie Etter at 04:00 No comments:

"O elegant giant" is the opening poem of American poet Laura Kasischke's award-winning eighth collection, Space, in Chains (Copper Canyon, 2011); many thanks to the author for the permission to reprint this poem here. To learn more about her and her work, please visit her website.

In the UK you can order Space, in Chains from Foyle's.
Posted by Carrie Etter at 00:58 3 comments: 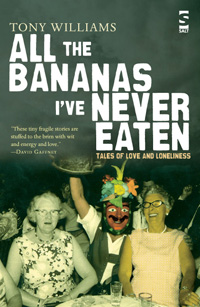 
Anya’s beauty was in her hair. She had it tied it up most of the time, sitting in The Plum Pie drinking a gin and bitter lemon, reading her copy of English Folk Tales with a faraway look. But everyone knew that when she let it down, for instance for the river-swimming at the summer festival, or at her father’s funeral, it reached down past her knees, almost to her feet. In that brown bough of frame her pale face, freckled and elfin, could not help but upset the young men of the village. She was a living rebuke, a medieval picture of innocence. In the water, it spread out in a vast circle so that they couldn’t approach her. It was like the stinging fronds of an anemone.
Geoff arrived and they fell in love. He had a job delivering veg boxes for the organic grocer’s. At first he smoked roll-ups, but he soon gave that up after he got together with Anya. His hair was the same colour as hers, but wilder. It lay in tufts over his shoulders. He had a bushy beard, and such a quiet voice that it was almost impossible to talk to him at all. But it was the right volume for whispering in Anya’s tiny white ears.
She took to wearing her hair down more often, and Geoff grew his hair too, and they walked in the fields outside the village, hand in hand. Anya’s hair fell down around her like a priestess’s robes.
One afternoon they went to a secluded spot amongst the beech trees. If anyone had been watching from the hedgerow he would have seen them taking off their clothes and walking, naked, on the crisp remains of last year’s leaves. He would have heard Anya say that her breasts were cold. She used that word – breasts – and the watcher would have reflected that that’s how it was when your girlfriend was ethereal. Perhaps he would have thought that they would put their clothes back on, but instead Geoff reached out his arms and drew her towards him.
He sat cross-legged in the clearing and sat Anya down facing him, then drew her closer so that their faces and bodies became invisible inside a tent of hair. Anya’s reached down past her buttocks and lay in pools on the grass and sticks, and she wrapped it round Geoff and over his shoulders, which were fairly well concealed already. (It had turned out, to nobody’s surprise, that he had the most tremendously hairy back.) They sat like for a long time. For a while Geoff talked about the seasons on a theme suggested to him by Anya’s complaint: natural materials he might use to warm her body or which were suggested by it; locations for a future paradise; and activities therein. Then Anya told him the most secret fears of her childhood, and described in detail the moments when, in her intimacy with Geoff, one by one, each of these fears had been finally laid to rest. Then they sang together for a while, in low voices which were comfortable in their slight tunelessness.
The watchers outside the hair-tent could hear only a low murmur, and none of what was said between Anya and Geoff. They felt ashamed, that they had gone there to see what was not meant to be seen.
In the beer garden later that summer, Briggsy set fire to them for a laugh. It wasn’t funny. Geoff managed to slosh his cider over his face and that saved him from the worst of it – it had to be shaved off later, but he wasn’t burned. But all of Anya’s fabled hair was gone in a second. She had to go off to the county hospital. That wasn’t the worst of it – the worst of it was seeing her suddenly bald head, a charred almond, the fear and humiliation and madness in those eyes. It was sickening to see her hauled through the centuries like that. They had to take off her blouse – that was burning too. And Geoff went and tried to hold her, but she was burned so they wouldn’t let him, and all he could do was to stand round with the others, crying and cooing. That white skin, marked with red burns.
Everyone condemned what Briggsy had done, and it was right that he went to prison. But we were a bit grateful too. We see Anya in The Plum Pie and ask how she is. She wears a scarf with her velvet jacket, but she doesn’t try to hide the scars. Sometimes Geoff’s in there on his own, and he’ll have a drink and a game of pool. He’s alright, a Thin Lizzy fan. We all saw what happened, we see what’s underneath now that the hair has gone. We pummel them with friendly gestures. And now they have to share the love.


"Anya's Complaint" appears in Tony Williams' just-released collection of short stories, All the Bananas I've Never Eaten: Tales of Love and Loneliness (Salt). His stories have appeared in Flash Fiction Magazine, Horizon Review, Fuselit and Under the Radar. His most recent poetry publication, All the Rooms of Uncle's Head (Nine Arches), was a Poetry Book Society Pamphlet choice. He lives in Northumberland and teaches at Northumbria University.
Posted by Carrie Etter at 04:37 1 comment: